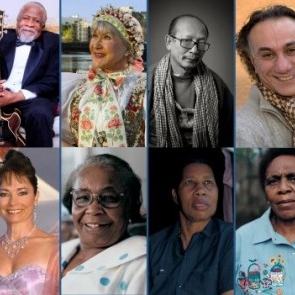 It's a tradition of it's own by now! Each year, American Routes celebrates Thanksgiving weekend with words and music from the National Heritage Fellows Concert in Washington DC. Since 1982, the National Endowment for the Arts has presented the fellowships. It's America's highest award in Folk & Traditional Arts. We'll hear a mix of this year's fellows live from the stage as well as great recordings of those from years gone by: The Holmes Brothers, Doc Watson, Treme Brass Band, Michael Doucet with Beausoleil, Boozoo Chavis, Flaco Jimenez, Mavis Staples, Del McCoury, John Cephas & Phil Wiggins, Andy Statman and many more. Blues and jazz, Cajun and zydeco, Tejano and klezmer, bluegrass and gospel as well as Native American voices, make a cornucopia of sounds and stories for the holiday!