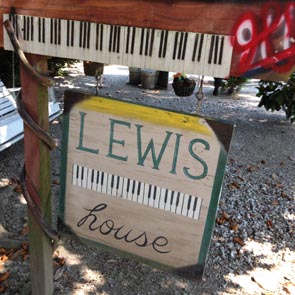 MUSIC AND MEMORIES ALONG THE MISSISSIPPI

How do we capture the intangible power of music and memories? We’ll first take a tour of the Lewis Family Museum and liquor store in Ferriday, Louisiana, where Jerry Lee Lewis’ sister Frankie Jean shows us around their family home decorated with show posters, weapons, magazine clippings, religious icons and other memorabilia. Then we’ll visit with the mayor of Ferriday and the people who turned memories into reality of club/hotel/bus depot/post office Haney’s Big House that burned down in 1966. Across the river in Natchez, MS, blues drummer and harp player Hezekiah Early looks back on playing in Haney’s house band. Back down in New Orleans, we’ll talk with Treme Brass Band’s leader and snare drummer Benny Jones and bass drummer Joe Lastie about their late drummer and friend Uncle Lionel Batiste who was memorably embalmed standing up in street parade finery.